While no one asked for it – here it is –

SHRED BUNDY – Tasteless on so many levels

SN87504276 – I just like this one due to the cinematographic nature of the description of the image, which I find kinda scary:

The mark consists of seven figures around a four-sided table; six of the figures are animals (from upper right proceeding clockwise: donkey, horse, boar, goat, duck, and lion); between the duck and the lion is a female human (an ale wife/barmaid) wearing a headscarf and holding two tankards that she is bringing to the table; she wears a long apron; on the far side of the table a lion wears a doublet which tied around his waist using a rope belt; the doublet is open on the left collar; the lion is raising his cup and holding the donkey by the shoulder as if to strike him with the cup; the donkey is leaning away from the lion with his hands on the table and his mouth open in a look of surprise; the donkey wears a jacket with broad flat collars and a belt; on the side of the table sits a horse on a stool who is wearing a jacket with a belt, buttons up the middle, and a wide collar; one hand rests on his cup on the table and the other holds a pipe which he is smoking; in front of the table sits a boar on a stool who is bent over with one arm leaning on the table and the other lying limp at his side while he vomits onto the ground; the boar wears a jacket with broad collars and cuffs and breeches with hose and garter tied in a bow, and shoes with a buckle. To the left of the boar, standing in front of the table with one hand leaning on a stool is a goat with horns who is drinking from a glass; the goat wears a doublet with collars and a rope belt, and a long-sleeved shirt underneath, and he wears breeches, hose, and a garter with a bow, along with buckled shoes; to the left of the goat is a pot; on the left side of the table sits a duck with his arms leaning on the table and his beak in a cup; the duck wears a jacket with a belt and broad collars; the style of the image is that of an early modern woodcut.

DOMINION OF THE DEAD – Eeek!

KUNGFUVAMPIRE – I am disappointed that this one was abandoned – I would definitely pay money to see this band.  Worst part is the objections by the trademark office were all easy ones to fix (IMHO).

HALLOWEEN CUTLERY – A very distinguished mark for  “Ladles, Service fork, Service Spoon, Butter separator, Cake Fork (etc). Not sure if these would be good for human flesh.

SATAN WORSHIPS ME (abandoned) –  Since this one is abandoned – apparently he doesn’t worship the applicant any more.  Fun Fact: the trademark office only identifies 11 design trademark applications with the word satan in the description, but 648 with “devil.” 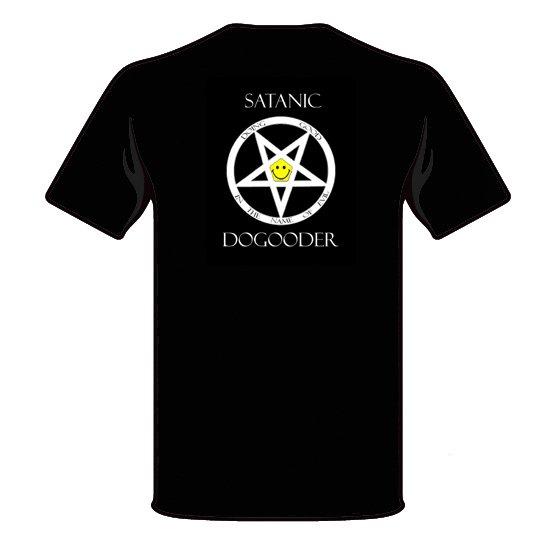 SATANIC DOGOODER DOING GOOD IN THE NAMEOF EVIL – Makes sense to me – I think.